Heads or tails - toss the Euro

The euro (sign: â‚-; code: EUR) is the official currency of 19 of the 28 member states of the European Union. This group of states is known as the eurozone or euro area, and counts about 343 million citizens as of 2019. The euro is the second largest and second most traded currency in the foreign exchange market after the United States dollar. The euro is divided into 100 cents.

The currency is also used officially by the institutions of the European Union, by four European microstates that are not EU members, as well as unilaterally by Montenegro and Kosovo. Outside Europe, a number of special territories of EU members also use the euro as their currency. Additionally, 240 million people worldwide as of 2018 use currencies pegged to the euro.

The euro is the second largest reserve currency as well as the second most traded currency in the world after the United States dollar. As of August 2018, with more than â‚-1.2 trillion in circulation, the euro has one of the highest combined values of banknotes and coins in circulation in the world, having surpassed the U.S. dollar.

The name euro was officially adopted on 16 December 1995 in Madrid. The euro was introduced to world financial markets as an accounting currency on 1 January 1999, replacing the former European Currency Unit (ECU) at a ratio of 1:1 (US$1.1743). Physical euro coins and banknotes entered into circulation on 1 January 2002, making it the day-to-day operating currency of its original members, and by March 2002 it had completely replaced the former currencies. While the euro dropped subsequently to US$0.83 within two years (26 October 2000), it has traded above the U.S. dollar since the end of 2002, peaking at US$1.60 on 18 July 2008. In late 2009, the euro became immersed in the European sovereign-debt crisis, which led to the creation of the European Financial Stability Facility as well as other reforms aimed at stabilising and strengthening the currency. 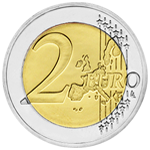